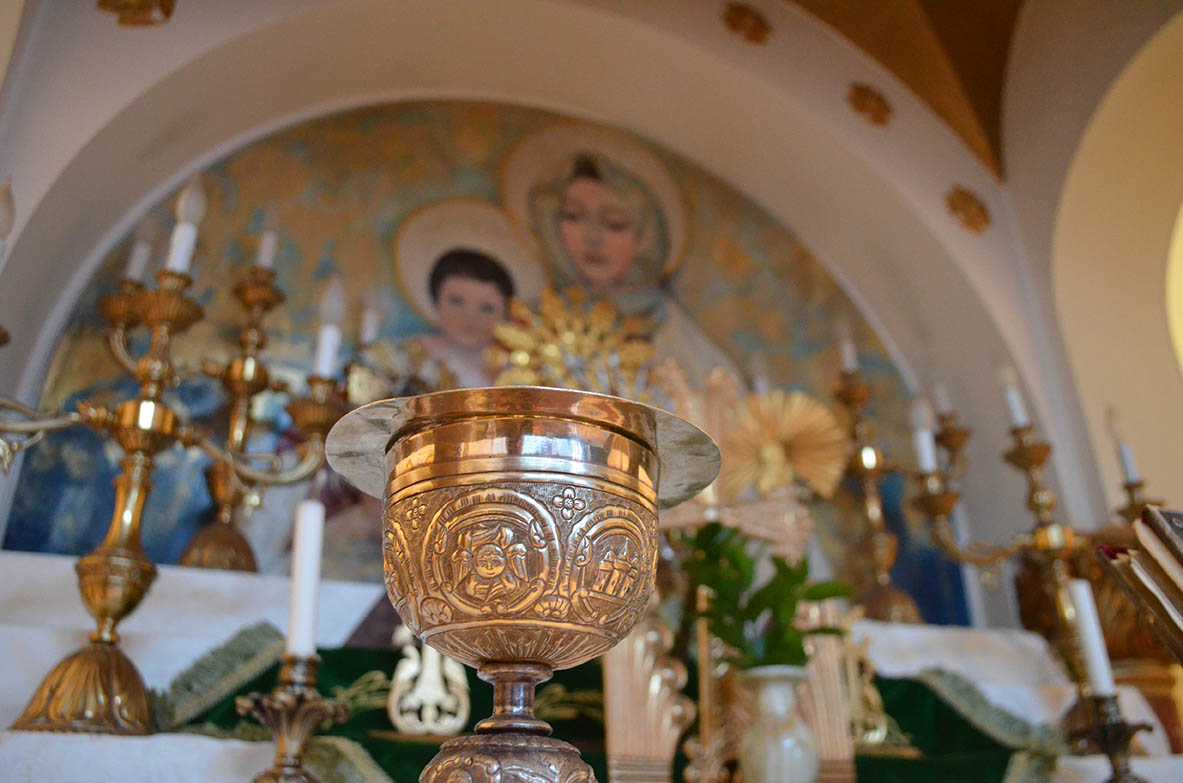 Communion means participation or the association or union with something. Here communion means the mystical union with Jesus Christ after receiving the sacrament of the Eucharist. So communion is also the bread and wine blessed and sacrificed found on the altar.

The bread and wine symbolize the body and blood of Jesus Christ. Jesus himself established this sacrament as spiritual nourishment for those who believe in Jesus Christ.

During the Passover/Easter meal, Jesus is at table with his twelve disciples. According to Jewish law, the meal consists of matzo (unleavened bread), dry wine and roast lamb. Jesus took the bread and blessed it, broke it and gave it to his disciples, he said: “Take and eat; this is my body.” Then he took the cup, gave thanks and gave it to them, saying “Drink from it, all of you. This is my blood of the covenant, which is poured out for many for the forgiveness of sins.”

The bread remains unchanged and the wine remains unchanged while keeping their shape and quality, so that the word of Jesus Christ makes them his Body and his Blood mystically. In other words, for our senses, bread is bread and wine is wine, but as Christians we believe in the words of our Saviour, that is they represent his body and  blood, and this is already the sacrament.

The Apostle Paul is very clear when he states: “Now then, when you come together, it is not the Lord’s Supper you eat.  For as you eat, many of you proceed with your own meal to the exclusion of others. While one remains hungry, another gets drunk. Don’t you have your own homes in which to eat and drink?

I myself have received this from the Lord, and I've passed it to you: the night he was betrayed, the Lord Jesus took bread, and gave thanks, and broke it, and said “This is my body which is given for you: do this in remembrance of me.” In the same way, after supper, he took the cup, saying, “This cup is the new covenant in my blood. Whenever you drink it, do this in remembrance of me.” So whenever you eat this bread and drink this cup, you proclaim the Lord's death until his second advent. And he that has eaten this bread, and has drunk the cup of the Lord unworthily will have to answer for the body and blood of the Lord. We should therefore examine ourselves before we eat this bread and drink this cup. He who eats and drinks, eats and drinks his own judgment if he does not discern the simple bread and the body of the Lord. That is why there are many weak and sick among, and a number are asleep in death for the same reason. If we had discernment to ourselves, we would not be judged. And if we are judged by the Lord, this is a correction we receive, so as not to be condemned with the world.”

Just as prayer purifies us and brings us closer to God, and when we communicate with the body and blood of our Lord, we purify and resemble Him who, to save mankind from the stains, spilled his blood on the Cross. So we must be careful with the sins that can prevent our union with the Holy and Holiness. Gregory of Tatev said: “This sacrament aims to increase the Grace and use medication against everyday sins.” That's why when we remember the Passion of Christ, we must take Communion. The patriarch Hovhannes Mandakouni said. “Those who approach Christ in faith and devotion are illuminated by the Holy Spirit and advance, day after day, in the actions of chastity.”

At the time of the apostles, believers would gather every Sunday for the Lord's Supper. During the early days of the establishment of the Church, liturgy was celebrated every day and the faithful would take communion. This tradition still exists in the Latin Church. Our Church also celebrated the liturgy every day, but at present, it is only on Sundays, during holidays and other occasions. Nowadays, the Armenian tradition is to take communion during the five great feasts of the Lord, especially during the Nativity feast and Easter.

Before taking communion, anyone, as indicated by the Apostle, must have the discernment to oneself to realize the life he lives, the sins he has committed and who have submitted him and driven him away from divine holiness. Having made this inspection by himself, the faithful must repent, confess, get ready by fasting and praying and focus all his attention on Jesus Christ and the divine things with the purpose to sin no more and take the communion afterwards.

The word “Badarag” means sacrifice, gift, present, etc. Etymologically speaking, it also means “dough”. In the religious sense, it means the mystification ceremony of the body and blood of Christ. This is why the servant who celebrates Mass is called “Badaragich” (celebrant), as one who does the baptism is called “Baptist”.

Those who are not baptized can not receive the sacrament of the Eucharist. Only Christians faithful to confession and ecclesiastical canons can commune.

There were times when “children”, that is to say, those who were not baptized, as well as unbelieving, the penitents and the impures headed to the court when the deacon announced during the second part of the liturgy: “Those who are not baptized, those who do penance or those who are not prepared to receive Holy Communion, leave.” This implies that it is forbidden to approach the divine sacrament without preparation and without following the canonical rules.

As we have already stated, self-examination, repentance, penance and confession are necessary preconditions to which charity is added, for one who has sinned has absolutely hurt one of his colleagues, and therefore he must pay for what he did by charity. And finally, it is mandatory to make a fast and dry fast before taking communion, according to the devoted tradition of our ancestors which is a very constructive and beneficial tradition.

The celebrant himself, too, must be well prepared for the liturgy with more attention and more severity. Our Church has traditions and ancient customs for the preparation of the celebrants. Celebrants must, for instance, go through the cells of the church  throughout the week preceding the Sunday liturgy and must participate in all divine offices from morning to night. They have to make a fast, read sacred books, fortify themselves by praying and getting on the altar with a body and a pure conscience to celebrate Mass.

Here is what the Shnorhali patriarch told celebrants: “It is with a pure soul, a holy heart, an immaculate faith, a great hope, a clear mind and with fear that we must serve the divine mystery. Just as water passes through the pipe, you must not let the mysterious words of prayer pass through you, whether psalms, readings from sacred books, offices, prayers for the priest liturgy, etc. You must, however, understand these prayers, or even recite them in tears and piety, as if these prayers gush from your heart and mind. "

The Divine Liturgy of our Church follows a well-considered order and accompanied by a mysterious and graceful solemnity: psalms and prayers healing the soul, captivating songs, appropriate clothing, candles, incense and dedicated participation and piety of the faithful to the ritual by singing or by keeping silent.

There are three essential conditions to celebrate the Divine Liturgy according to the canons and rituals established by the Christian Church:

1. The presence of an ordained servant of God and anointed

The Divine Liturgy is celebrated in an atmosphere of piety and veneration by the faithful. No whisper or murmur, no back and forth, and finally, no other movement or voice to share the voices and movements of the servants who celebrate Mass. All secular or ecclesiastical faithful should focus their mind on the divine sacrament and infallibly follow the prayers and songs.

*This explanation written by the website is from the book “Christian” the Catholicos of the Great House of Cilicia Pabken I Gulesserian. (4th edition, Antelias 1971)